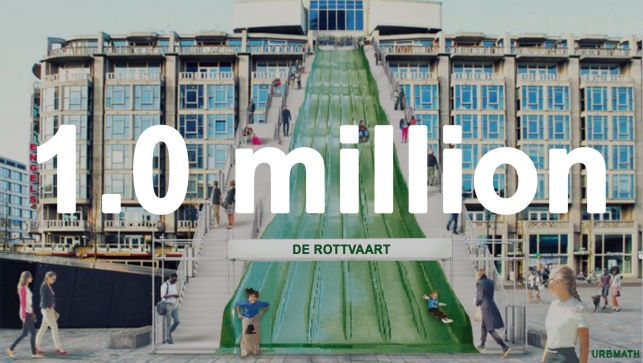 Since its inception it has been the talk of the internet. URBMATH made an alternative proposal of MVRDV's giant staircase of 180 steps. The architectural remix, as the bureau founder and lead architect Mathis J. Bout refers to the alternative plan, juxtaposes a gigantic slide of 65 meters long on top of the steps. Rotterdam citizens passionately have been sharing their love for the alternative set up. Moreover MVRDV co-signed the slide via their own Facebook page and a news article in a wellknown Dutch daily newspaper. In a very short amount of time the Facebook event ' Sliding Down The Stairs' reached an engagement of 25000 people and a total reach of 1 million people.

In a news article Mathis J. Bout has hinted at a gigantic video projection of an immersive animation of the slide....Read full press release